It happened around 4:30 p.m. Monday at One Memorial Drive next to Interstate-44 and the Gateway Arch. People working in the building tell KMOX they heard the impact when he landed on the third-floor balcony after jumping from the 11th story

Brown, 61, was a principal partner for the Brown & Brown law firm, whose St. Louis office is located in the building.

Brown was most recognizable for his eye patch which covers an injury he received when he was a child. Many in St. Louis will remember him from TV commercials with his law parter and brother which often ended with the lines, “If you can’t come to us, we’ll come to you.”

Police tell KMOX the incident is being handled as a suicide.

A spokesperson for the law firm says the Brown family is in seclusion and shock. There’s no information on what might have led up to Brown’s death.

Brown grew up in north St. Louis County and received degrees from both the University of Missouri in Columbia and Saint Louis University. 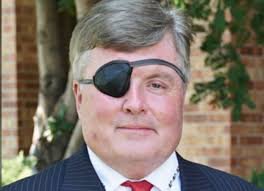