UK: Ministry Of Justice Says Criminal Courtcases Backlog Moves Beyond Half A Million

Combined outstanding cases in the magistrates and Crown courts surged 500,000 over the summer, new figures show, but there are signs that the system is slowing starting to perform better.

The figures cast a spotlight on the monumental task of trying to reduce the backlog that was significant before the pandemic and has snowballed since the shutdown of many court services since the spring. The ongoing restrictions on social interaction have meant that holding trials continues to be a challenge.

There was a sharp decrease in April in the number of receipts recorded in the courts as the lockdown reduced criminal activity. In some respects the backlog is showing tentative signs of easing: from a peak of 525,000 outstanding magistrates’ court cases at the end of July, that figure has fallen every week since. Throughout every week in August there were more disposals than receipts.

But the backlog in the Crown court by 23 August was high as ever post-lockdown. While there were 2,181 receipts, there were also just 1,691 disposals, with 55 trials completed during the previous week.

Simon Davis, president of the Law Society, said the government needs to build court capacity by significantly increasing the number of Nightingale courts, making maximum use of normal court hours and the existing court estate, and avoiding any restrictions on judges sitting while there are court rooms (real, virtual or?Nightingale) available.

‘With outstanding cases in the Crown court continuing to creep up, it is vital the additional capacity is used appropriately to prevent these backlogs from growing.

‘Investing in legal aid for early advice and legal representation will ensure?judicial time is used as efficiently as possible?in cases which do go to court. We are also calling on the?chancellor?to ensure that?our justice system is equipped with the funding it needs to face the challenges of the future.’

Reflecting on the figures, a Ministry of Justice spokesperson said: ‘The new video technology we rolled out earlier this year has been used in thousands of trials and we’re already seeing the number of outstanding cases in the magistrates’ courts falling as a result.

‘This is a huge step in getting the justice system back up to speed, but we accept that there is still work to boost capacity and to reduce delays.’

The department says that opening more Nightingale Courts, rolling out Plexiglass in courtrooms and extending operating hours will help to deliver speedier justice.

Last week the MoJ unveiled plans to employ 1,600 new court staff and increase custody limits from 182 days to 238 days. So-called ‘Covid operating hours’ are also being explored to see whether court buildings can be used for trials outside the standard weekday times of 10am to 4pm.

In March, almost half of all courts were closed and jury trials paused in response to the coronavirus pandemic, but 90% of courts are now open again, and HMCTS aims to have opened 250 rooms suitable to hear jury trials by the end of October. 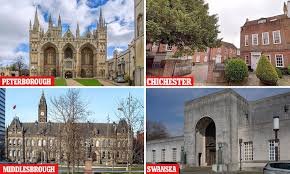