What good are lawyers?

At end of the second world war, the US took on the bold plan of introducing a liberal legal system in the conquered countries. This would involve not only identifying and eradicating fascist laws but also removing judges, officials and lawyers involved in the system. This was connected to the allies’ war aim of achieving unconditional surrender from Germany and Japan. This book is about that plan and how it was achieved.

It was an incredibly bold venture considering how embedded the Nazi and Japanese regimes were. Generations had grown up knowing little else for any opposition or criticism had been removed. Interestingly, there were some concerns in American academic circles that the plan was illegal in international law. 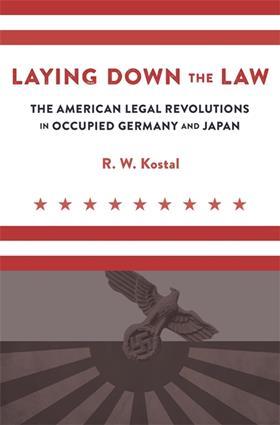 In Germany, at least, the task of identifying Nazis should have been relatively straightforward as there were records of party membership. But the allies were met by a collective failure to acknowledge responsibility. War crimes were seen by some as the fault of a small number of gangsters. One third of German laws were racially motivated and this resulted in a vast programme of reform. Very few judges passed the denazification requirements. By the summer of 1945, there was virtually no legal system at all, leading to a huge backlog of civil and family law cases.

In Japan, unlike Germany, the US totally dominated that country’s occupation. It was led by a maverick military commander who had little interest in the niceties of international jurisprudence. Officials had a ‘pitiful lack of basic knowledge of the Japanese constitution’. The Americans allowed the Japanese emperor to remain in office, though stripped of his powers. He was the only defeated ruler who retained his post.

Despite the challenges in both countries, the enormity of the task was matched by a staggering pace of reform. In Japan there was a draft new constitution within six months. In both defeated countries much work was done by lawyers who had joined the forces when war broke out. They tended to be Wall Street or provincial lawyers and not academics or experts. There was also a group of German, mainly Jewish, lawyers who had fled Germany in 1930s and were fluent in the language and had experience of the system before the Nazis took power. There was no equivalent group of experienced lawyers who could do the same for Japan.

It is the stories of the personalities involved that makes the story so interesting. Many of these lawyers stumbled into this work for want of other options. There was a German Jewish judge who had fled Germany in 1939 and applied for and got a position in Japan after the war. His ignorance of Japanese language, culture, history and politics was seen by his employers as an asset. Presumably the people in charge did not want the officials to be influenced by any sentimental feelings towards the defeated nations. He and many others just got on with the programme of reform. As the book points out, professional academic constitutional experts may have been better qualified but would have taken years. There is a lovely phrase in the book about how ‘the lemons left by the death of FDR’ (the leader of the New Deal) were turned into ‘careerist lemonade’ by a lawyer who became involved in this mission.

It was ironic, however, that the US upheld inalienable rights abroad but pursed a less liberal policy at home which worsened during the Cold War. The Nazis had admired the American pre-war racial segregation laws.

This book is written almost exclusively from the American perspective. There is not much information on the role of the other allies, which is surprising as conquered Germany was split into zones of occupation. Britain had a cadre of experienced colonial administrators and so presumably had France. It would be interesting to compare experiences of the different approaches by the allies. I suspect and hope there are many more stories to be told about the role of lawyers in rebuilding the word after 1945. Having said that this is an exceptional account of amazing achievements by the legal profession for which the world should be grateful.

David Pickup is a partner at Pickup & Scott Solicitors, Aylesbury