Black lawyers in Britain are speaking out about their experiences working in the U.K.’s justice system as the profession vows to confront the historic racism within their industry. Reports Bloomberg Law

“As a Black or ethnic-minority lawyer, you are never too far away from reminders that the firm and the industry were not designed for people like you to rise to the top,” said Roy Appiah, a senior associate at Clifford Chance.

“These reminders come in many forms, like having your security pass checked twice to enter work, or being invited to training about what leadership looks like — where none of the dozen speakers look like you,” he said.

Appiah’s firm is one of 17 that promised on Monday to take measures to boost diversity in their firms and commit to recognize and having open conversations about race and racism with their colleagues.

The move will ensure junior ethnic-minority lawyers have access to, and sponsorship from, senior management, and that interview and offer rates, retention rates, pay and promotion rates will be actively monitored.

The pledge comes in the wake of the Black Lives Matter movement, which saw mass anti-racism protests around the world after the murder of George Floyd in Minneapolis in May. The movement has emboldened many Black people to share their experiences and has forced White communities and corporations to have frank conversations about racism and how they should tackle it.

“Navigating the world of Whiteness is second nature to me but I still do a headcount when I get in the courtroom,” Abimbola Johnson, a criminal defense barrister at 25 Bedford Row, said in a phone interview. Before trials, Johnson said she tells her clients that “we’re probably going to be the only Black people there” and tries to reassure them that the ethnicity of the jury won’t affect the verdict.

Johnson’s daily experience is backed up by government data that shows some 93% of court judges are White, while just 3.2% of barristers are Black, according to 2019 figures from the Bar Standards Board.

The commitment by the firms is a “significant step in helping other Black and ethnic-minority staff feel they can be themselves from the outset, and not have to earn the right to be themselves,” Appiah said in the statement accompanying the U.K. announcement.

“I’ve sometimes had to take the bass out of my voice. I’ve felt unable to express frustration, even when that frustration was justifiable,” he said. “I used to feel cautious about leading, or taking on additional responsibilities, out of concern that any failing of mine would confirm that people like me do not belong.”

The initiative has been led by diversity recruitment specialist Rare. Its research shows that more than a third of the 44 Black, Asian and minority ethnic — BAME — lawyers it spoke to had experienced explicit racism directed at them and 84% had experienced implicit racism, so-called micro-aggressions and exclusion.

The group also analyzed the employment records of 5,769 lawyers from nine City law firms. This revealed that BAME lawyers spend on average 20% — or 18 months — less time in their posts than their White counterparts.

Johnson says she sometimes receives comments about her hair or appearance from other lawyers in court, “comments which make you feel ‘othered’ and make it obvious you don’t look like the other people in the room.”

In the middle of one case, Johnson said the prosecuting lawyer told her that he’d underestimated her. “He’d seen me and formed a view of what I should sound like and he was surprised by the fact that I’m well-spoken and educated in a certain way,” she said.

“Sadly,” she said, “race discrimination is prevalent within the legal profession.” 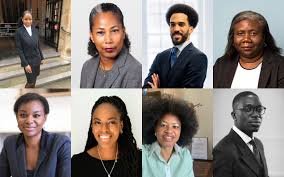