Turkish police stopped dozens of senior lawyers marching to the capital Ankara on Monday to protest a draft bill governing the organisation of bar associations that they say is aimed at silencing those critical of the government.

President Recep Tayyip Erdogan‘s ruling AK Party has proposed changes to the associations’ election system that it says will make it more democratic and increase representation from smaller cities.

But the lawyers marching say the move would pave the way for the formation of government-friendly associations.

Most bar associations in Turkey are highly critical of the government and its human rights record and say the judicial system has descended into chaos with lawyers jailed, defences muzzled and confidence in judges and prosecutors destroyed.

On Monday, Ankara police stopped the march by barricading a highway leading to the city, and footage showed the heads of bar associations being pushed and jostled by police.

“Our march to the capital of this country is being stopped for no reason and is completely unlawfully,” Erinc Sagkan, head of Ankara’s bar association, told reporters.

“It’s a black day for Turkey as its lawyers are blocked from walking into the capital city through violence,” he said. The lawyers started a sit-in protest following the blockade. 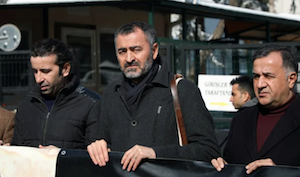