It’s all very complicated – 90 minutes takes us through the Bale Tradmark issue…….

Anyone looking to get ahead of themselves this transfer window and get ‘Bale 11’ emblazoned on the back of their new Tottenham shirt, or any Spurs shirt for that matter, is out of luck. That’s because former Spurs winger Gareth Bale has, apparently, trademarked his own name, preventing anyone from using it…even at the park for a kickabout.

Bale has been in the headlines recently, as usual, for trying to secure a move away from Real Madrid. After initially living up to the billing following his move from north London, it has all been downhill for the Welshman since he won them a Champions League with an overhead kick in 2018.

Things went a little quiet after the ‘Wales, Golf, Madrid’ sh*tshow, but he recently brought his name into disrepute when he took out Real at the knees for ‘making things difficult‘ over his transfer situation. The club have responded by offering to pay half his wages wherever he ends up next, because they actually do really want him gone.

Anyway, back to the point. Football London’s Spurs correspondent Alasdair Gold notes that some supporters have been having issues printing the ‘Bale‘ name on the back of their shirts, and he offers a simple, if slightly outlandish explanation. Bale, it’s claimed, has trademarked his name, meaning the club cannot use it to sell shirts.

Oh. That is awkward.

Naturally, there are some sceptics, considering that Bale is by no means the first player to trademark his name.

Someone else has raised the issue that you can get ‘Burger King’ on your Spurs shirt, but not Bale. Not quite sure what their point is, or why they’ve chosen Burger King to prove it, but there we are.

It seems it’s specifically Spurs shirts subject to the block. ‘Bale 11’ at Manchester City or United? No problem.

Is it actually Bale copyrighting, then? Or is it just Spurs being petty? Who knows.

Tottenham play Everton on Sunday in their opening fixture of the 2020/21 season. Gareth Bale is unlikely to feature. 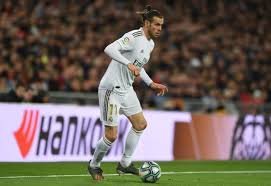