The price of love: Overseas US person to pay $5000 for relationship with sanctioned person

The US Office of Foreign Assets Controls (‘OFAC’) has announced that ‘a natural U.S. person (“U.S. Person-1”) has agreed to pay $5,000 to settle their potential civil liability for engaging in at least 24 transactions for the benefit of a foreign individual who at the time was a specially designated narcotics trafficker.’

OFAC said that in 2015, the foreign individual, ‘who at the time was a specially designated narcotics trafficker (“SDNT-1”), was in the embassy for a meeting regarding their designation status (the “embassy meeting”)’ and that for the embassy meeting, SDNT-1 was accompanied by a former host nation official who OFAC would also later designate as a specially designated narcotics trafficker (‘SDNT-2’).

It said that U.S Person-1 was later introduced to SDNT-1 by SDNT-2, who was a mutual acquaintance, and that the two (U.S Person-1 and SDNT-1) began a relationship in which the former bought the latter ‘jewelry, meals, clothing, hotel rooms, and other gifts’ despite knowing that SDNT-1 was a specially designated narcotics trafficker. During this time, SDNT-1 was seeking to be removed from the US Specially Designated Nationals (SDN) LIST.

OFAC says that US Person-1 has been relieved of their duties and that the US Army has taken disciplinary action against them. It said: ‘All U.S. persons, including members of the military and civil service stationed abroad, should exercise caution before voluntarily engaging in relationships with foreign persons that the U.S. person knows, or reasonably should know, may have a sanctions nexus, as any financial transaction or exchange of goods or services with a designated person – even in the context of a personal relationship – may constitute a violation of U.S. sanctions. Those serving in national security positions should be particularly cautious, especially when their voluntary relationships can harm or give the appearance of harming the integrity of government processes.’

‘The only thing I am surprised by in [this] OFAC enforcement action is how long it took for this type of conduct to be enforced against. Unfortunately, I have heard many stories of USG employees and former USG employees developing relationships with sanctioned persons, often in furtherance of purported efforts to get them delisted in exchange for money or gifts. That doesn’t necessarily appear to be the case here insofar as it appears the gifts were flowing in the opposite direction, however, the fact pattern described by OFAC is less unusual than one would think.’ 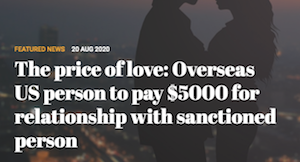