Last week the United States Supreme Court ruled that Title VII of the Civil Rights Act of 1964 – the statute that bars discrimination in the workplace based on sex – protects gay and transgender workers. The ruling was a major victory for the LGBTQ community, as well as some Stanford law students graduating this year.

“We are absolutely thrilled with the outcome,” said Connie Wang, JD ’20.

Wang is one of the Stanford law students who participated in the Stanford Supreme Court Litigation Clinic last year. Under the direction of Stanford Law School faculty members, students in the clinic work on Supreme Court cases, representing parties and serving as advisers.

The case they worked on was Bostock v. Clayton County, Georgia, which combined three cases, including one involving Donald Zarda, a New York skydiving instructor who was fired after telling a customer he was gay. Zarda’s legal team included students in the clinic, and the clinic’s co-director, law Professor Pamela Karlan, who argued the case before the Supreme Court last October.

“There are only so many cases that go up to the Supreme Court each year,” Wang said. “So we’re lucky that the court chose to hear this one.”

Wang and fellow law students Ben Hattem, JD ’20, and Tyler Bishop, JD ’20, spent months in the clinic, assisting Karlan in researching and developing legal arguments, writing and editing briefs, and participating in moots, or simulated court hearings. The case had already been heavily debated in lower courts, so their work focused on how best to frame and add to the existing arguments.

One of their main arguments focused on Title VII’s use of the word “sex” and whether a person fired for sexual orientation is discriminated against because of sex. In an article published last November in Stanford Lawyer, the students explain that firing an employee for being gay is, by definition, discrimination because of sex.

“If a man is fired for being attracted to men where a woman attracted to men would not be, that is discrimination on the basis of sex, pure and simple,” they wrote. “In other words, if two employees, Joseph and Joanne, both show up to work on Monday and tell their boss that they married Bill the day before and the employer congratulates Joanne but fires Joseph, that employer has clearly discriminated against Joseph because of his sex.”

The Supreme Court agreed. In a 6-3 decision, the justices ruled that the protections outlined in Title VII of the Civil Rights Act extend to gay and transgender workers. The ruling came as a surprise to many, given the court’s conservative make-up.

More work to be done

In the days since the Supreme Court announced its decision, many have lauded it as a victory for LGBTQ workers’ rights and the plaintiffs in the case.

“I’m relieved that the gay and trans employees at the heart of these cases ‘won,’” said A.D. Sean Lewis, a trans student at Stanford Law School who previously served as president of OutLaw and is now the organization’s Trans & Nonbinary Outreach Chair.

But Lewis explained that while the court’s decision is a step in the right direction, there remains much work to be done to achieve full protections for marginalized workers. He noted that many people remain unprotected because of inherent and court-created limits of anti-discrimination laws.

“It’s worth noting that many U.S. workers aren’t even covered by the decision,” he said. “More and more workers can’t access courts to vindicate their rights because the Supreme Court held that the Federal Arbitration Act permits employers to require workers to sign away their rights under Title VII through mandatory arbitration clauses.”

Despite enduring flaws in the legal system, last week’s ruling remains a point of celebration for many, including Stanford’s legal scholars who helped facilitate it. In a recent discussion with Stanford law Professor Joseph Bankman, Karlan noted the importance of this decision for so many people.

“I’ve gotten emails from young people who are gay who now realize the importance of this – that they can aspire to fair employment practices. And that just means a huge amount to me – that this is a case that touches real people’s lives in real ways,” she said. 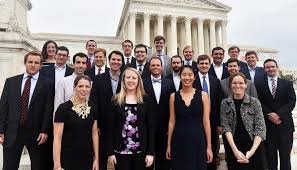