The Independent Commissioner Against Corruption in South Australia has arrested and charged a magistrate over alleged offences involving a government-issued vehicle.

In a statement, the Honourable Bruce Lander QC, Independent Commissioner Against Corruption (ICAC) in South Australia, said that earlier on Monday his investigators had executed five search warrants and arrested Magistrate Robert Harrap.

“It will be alleged that, on two occasions between 19 May 2020 and 22 May 2020, Magistrate Harrap misrepresented who was driving his [government-issued] vehicle at the time it was observed committing traffic offences and thereby engaged in deception in order to obtain a benefit for himself,” the statement outlined.

“It will also be separately alleged that, between 10 May 2020 and 29 May 2020, Magistrate Harrap conspired with another person to pervert the course of justice and conspired to abuse his public office in relation to a matter that was to be heard by him.”

In issuing his statement, Mr Lander noted that he had regard to the “special circumstances of the matter”, and had deduced it was “appropriate” to name Magistrate Harrap as an individual arrested and charged as a result of an investigation by ICAC. 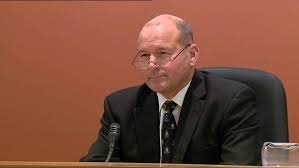