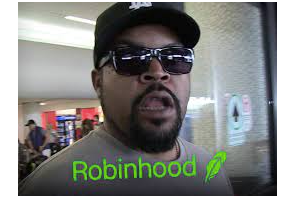 Robinhood has a new legal opponent in rapper Ice Cube, who filed a federal lawsuit Wednesday accusing the stock trading platform of damaging his reputation by using his image to promote its products, without his consent.

“In a cynical effort to appeal to a young demographic, Robinhood has engaged celebrity endorsers such as Jay-Z, Nas, and Jared Leto to endorse its products and services,” according to the complaint, filed in federal court in California. “However, in an act of unmitigated gall and transparent retribution, Robinhood and its subsidiary have now used the image and likeness of Ice Cube – without his permission…”

According to the complaint, on March 8 Robinhood ran an ad on its Robinhood Snacks website and app using Ice Cube’s image and likeness, along with an altered version of his signature catch phrase “Check Yo Self.” The 51-year-old artist, whose legal name is O’Shea Jackson, Sr., said the ad used an altered version of the phrase originating in lyrics from his hit single by the same name. Such use, the rapper claims, created the false impression that he endorses Robinhood.

Robinhood’s product communications lead Lavinia Chirico responded to the lawsuit telling Yahoo Finance, “No, we didn’t use his image without permission. The image was licensed and used for non-commercial, editorial purposes in connection with a blog article.”

Making an ‘example out of Ice Cube’

The trading platform ignored Ice Cube’s demands that it stop using the phrase, the complaint alleges. Ice Cube says that Robinhood is using his image to retaliate against him over his association with business partner and civil rights attorney Jeff Kwatinetz, who was involved in a separate lawsuit against the trading platform over its controversial decision to limit trading of GameStop (GME) and other heavily shorted stocks.

Robinhood “specifically sought to punish and make an example out of Ice Cube,” according to the complaint, which alleges violations of federal trademark law as well as California codes and common law governing rights of publicity. Robinhood’s actions, the filing states, were wrongfully intended to generate revenue by promoting and attracting customers to its website, products, and services.