Lawyers Weekly Australia reports the story. The publication  doesn’t  say specifically that it was suicide, but it is intimated in the report .
The Brisbane Times writes

In the space of six weeks, the Federal Circuit Court judge went from the position of sole judge in the Townsville registry in north Queensland, to being moved back to Brisbane so he could be supervised amid conduct concerns, and later being found dead in bushland close to his abandoned ute.The cause of death remains unconfirmed, with an autopsy to be conducted.Judge Andrew was moved from Townsville to Brisbane last month. It followed a retrial being ordered on August 28 in one of his cases from September 2019 after he was found to have engaged in “hectoring, bullying, insulting and demeaning” conduct towards a Queen’s Counsel and solicitor.

In a statement issued to media late Thursday night, Family Court Chief Justice William Alstergren confirmed that the body of missing Judge Andrew had been discovered by authorities in bushland at The Gap in western Brisbane.

Judge Andrew was last seen driving in the direction of Mount Coot-tha, where he would frequently walk. His car was discovered on Dillon Road that afternoon.

Justice Alstergren said his tragic passing was a timely reminder of the “extraordinary” pressure on those who practise in the “often highly emotive family law jurisdiction”.

Attorney-General Christian Porter said he was deeply saddened by the death of Judge Andrew and offered his thoughts to family, friends and colleagues. He confirmed that the Federal Circuit Court is providing support.

“I extend my deepest sympathy to Judge Andrew’s wife Nicole and his daughters Bridget and Morgan and all those who were affected by his tragic loss,” Mr Porter said. 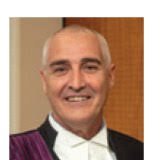