The phrase “server fixation date and termination” might sound boring or gibberish to anyone other than an attorney or a tech reporter, but that term, from the U.S. Copyright Office’s April update on the Music Modernization Act, has become a potentially thorny issue among those hammering out rules for the new law, which takes effect in January.

At issue is a data point that the newly formed Mechanical License Collective wants to see in monthly reporting from digital music providers, as the new law sets rules for a U.S. music market that has shifted quickly from sales to streaming.

Passed with overwhelming bipartisan support in 2018, Title I of the three-part Orrin G. Hatch-Bob Goodlatte Music Modernization Act (MMA) moves streaming from a compensation model built for piano rolls more than a century ago to a blanket license that will apply to all legal streaming services.

In an effort to untangle the issue, the Copyright Office has scheduled an ex parte teleconference for Monday among the parties who have commented on this particular detail since it posted a “Notice of proposed rulemaking” (NPRM) docket in April, the first major update since September, when the office issued a “Notification of inquiry” (NOI) to establish blanket license regulations, inviting input from all interested parties. 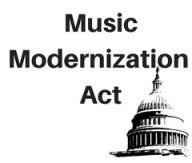