Ms Jilani grew up in Pakistan. Her father was a politician and an outspoken critic of the country’s military dictatorship, who spent much of her childhood in prison. Injustices and human rights abuses witnessed first-hand sparked a lifelong commitment to challenging social norms and promoting human rights and democracy in Pakistan, and around the world, in Ms Jilani.Lawyer, pro-democracy campaigner and avid civil rights activist Hina Jilani is the recipient of the 2020 Stockholm Human Rights Award – bestowed annually by the Swedish Bar Association, the International Bar Association(IBA) and the International Legal Assistance Consortium.

In 1980, she founded Pakistan’s first all-female law firm, providing legal aid to women. The scope of her practice grew to include legal education, research and protection from exploitation. The same year she established the Women’s Action Forum, a campaign group that advocated for women’s rights and challenged the discriminatory laws with which she had grown up.

In 1986 she set up Pakistan’s first legal aid centre, going on to conduct many landmark cases and setting new standards for human rights in Pakistan. In the same year, the Human Rights Commission of Pakistan was established with Ms Jilani as one of its founding members.

In 1990, Ms Jilani co-founded Dastak, a shelter providing free legal counsel and support to women fleeing gender-based violence. It also raises awareness on issues such as domestic abuse, child marriages and ‘honour killings’. Her work often makes her vulnerable to hostile propaganda, arrests, abuse and intimidation, but she continues to live and work in Lahore, where she remains committed to social change and at the heart of the human rights movement.

The new millennium brought further achievements including her appointment as the first special representative of the United Nations Secretary-General on Human Rights Defenders in 2000. A position that saw her spend the following eight years working to empower and protect those campaigning for civil rights. In 2013, Ms Jilani joined The Elders, a group of independent global leaders founded by Nelson Mandela. Their vision is to work together for peace, justice and human rights, to promote ethical governance, to resolve conflict and address its root causes and to challenge injustice.

Ms Jilani remains an advocate of the Supreme Court of Pakistan, having been appointed in 1992. She also currently serves as president of the World Organisation against Torture, co-chair of the World Refugee Council and co-chair of the International Task Force on Justice.

IBA president Horacio Bernardes Neto said: “I can think of no more deserving recipient of this award than Hina Jilani. She has dedicated her life to the protection of the vulnerable through her commitment to human rights and the rule of law. She has worked tirelessly and in situations of great adversity to uphold democracy, to challenge injustice and to defend the defenceless. Her ceaseless endeavours have made both Pakistan and the wider world a better, safer and more just place.” 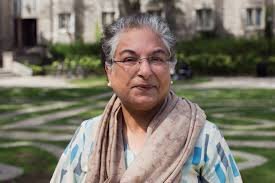