“Dear Sir,” began the letter from Washington that found its way to Bernard S. Cohen at the American Civil Liberties Union in June 1963. “I am writing to you concerning a problem we have. Five years ago my husband and I were married here in the District. We then returned to Virginia to live. My husband is white, and I am part Negro and part Indian.”

The letter, from Mildred Loving, went on to explain that when she and her husband, Richard, returned to Caroline County, Va., to live, they were charged with violating Virginia’s law against mixed-race marriages and exiled from the state.

“It was that simple letter that got us into this not-so-simple case,” Mr. Cohen said later. The not-so-simple case was Loving v. Virginia, which Mr. Cohen and his co-counsel, Philip J. Hirschkop, eventually took to the Supreme Court. In a landmark unanimous ruling in 1967, the court said that laws banning interracial marriage, which were in effect in a number of states, mostly in the South, were unconstitutional.

Mr. Cohen died on Monday at an assisted-living center in Fredericksburg, Va. He was 86.

His son, Bennett, said the cause was Parkinson’s disease. 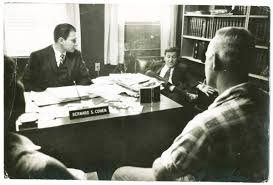