Very interesting to see what happens here, it will determine in large part how BLM and the law interact going foward..  See our original report on their arrest

In a high school English assignment in which students were asked to describe themselves as a metaphor, Colinford King Mattis had a lot of fun with his essay.

Mattis described himself as a piece of vintage furniture that you aren’t sure you want, but you bring it home anyway and put it in a room — and it somehow perfectly brings the room together, and you don’t know how you lived without it in the first place.

In recent days, dozens of colleagues, friends and former classmates have come together and reached for the same hopeful metaphor. As the 32-year-old lawyer sits in a Brooklyn jail awaiting a bail hearing, they say they can’t imagine a room without Mattis in it. He is a loyal and community-minded man who poses no threat to society and deserves to be released pending trial, they argue.

Mattis, along with Urooj Rahman, 31, was arrested in New York City on May 30 during protests against racism and police brutality following the death of George Floyd at the hands of Minneapolis police officers. The two were charged with attempting to burn an unoccupied, already damaged New York City Police Department vehicle. Nobody was injured in the incident. Now Mattis and Rahman face additional federal charges that carry a 45-year mandatory minimum sentence, and up to life in prison — for what essentially amounts to property damage.

Activists and lawyers are alarmed by the unusually harsh charges being brought against them, and believe Mattis and Rahman should not be awaiting trial in jail. They say that they are not a threat to society — which the prosecution is arguing — and it is highly unlikely they’re a flight risk or will commit another crime. Mattis is a corporate lawyer educated at Princeton and NYU Law; Rahman went to Fordham Law and works for Bronx Legal Services, helping low-income clients fight evictions in housing court. Both grew up in New York and are deeply connected to their communities.

Mattis and Rahman — a Black man and Muslim woman — sit in jail at the same time that the police officers who fatally shot Breonna Taylor have not even had charges brought against them.

The contrast is particularly stark at this moment people around the world are rising up and demonstrating against racism. Lawyers familiar with their case say it is highly unusual for defendants like Mattis and Rahman — Ivy-league educated and human-rights minded with no history of violence — to be held in jail, and not out on bail.

The decision of whether defendants are released or detained pending trial will determine whether they can be at home contributing to their legal defense or whether they will be in jail, where COVID-19 continues to run rampant; where inmates are frequently targets of violence; and where they are separated from their attorneys, peers and friends.

Hundreds of law students and professors from NYU — more than 850 — wrote to express their concern with the federal government’s aggressive charges and pursuit of pretrial detention; so did the Legal Services Staff Association union. Fordham Law School gathered 650 signatures from students and faculty. They wrote, “We believe that the Department of Justice’s prosecution and efforts to incarcerate Urooj and Colin are a gross overreach of federal law enforcement power, and an attempt to stifle and delegitimize dissent against police brutality.”

The head of Mattis’s former high school, the boarding school St. Andrew’s in Delaware, issued a statement to the school community in support of their former student. HuffPost spoke to Darcy Caldwell, his former English teacher, who described him as a teenager who overcame enormous academic hurdles to become successful in her class.

“Colin has so much goodness to offer this world and I hope he has the chance to do that,” she said.

Alexa Caldwell, Darcy’s daughter, attended school with Mattis and was on a trip to a school conference with him in 2006. He was always social justice minded, Caldwell said. She remembers boarding the bus back to the hotel and how he and his friend Ikenna Iheoma couldn’t stop talking about a senator they met. It wasn’t someone she had heard of before — his name was Barack Obama. They even took a photo with him. 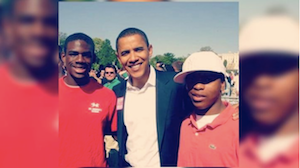