Vice will start you off

When the American fast food franchise expanded its antipodal operations in 1971, the name “Burger King” was already registered to a takeaway food shop in South Australia—forcing it to operate its stores under a subsidiary named Hungry Jack’s. Hungry Jack’s, in partnership with Burger King Corp, expanded rapidly throughout the ‘80s and ‘90s, becoming a formidable chain in its own right until the two companies entered into a vicious legal dispute in the early noughties.

Hungry Jack’s won, and in 2003 absorbed all remaining Burger King restaurants in Australia—making it the nation’s biggest rival to McDonald’s in the way of fast food burger chains. Which brings us to today.

McDonald’s, legal trademark holders of the Big Mac since 1973, launched their own legal battle with Hungry Jack’s last week over claims the Australian chain infringed on their intellectual property by releasing a burger called the “Big Jack”. The American fast food giant filed Federal Court proceedings and are seeking an injunction on Hungry Jack’s’ use of the name, accusing them of “flagrant or wilful disregard” of McDonald’s’ trademarks.

According to Australian business publication SmartCompany, Hungry Jack’s submitted a trademark application for Big Jack in November 2019, which was accepted in February without any public opposition. McDonald’s, however, claims it had by that stage already flagged with Hungry Jack’s that its trademark infringed on their intellectual property. 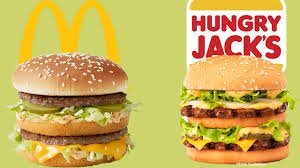