Mexican labor lawyer Susana Prieto Terrazas has been released from jail, but said she has been banned from travelling to the border state of Tamaulipas where she led a historic 2019 battle for higher wages.

Prieto will be required to live in her registered address in the state of Chihuahua for the next 2 1/2 years, according to a Tamaulipas state judge’s order announced late Wednesday. Prieto is based out of an office in Juárez.

Prieto had faced charges that include inciting riot, threats and coercion stemming from a March protest by about 400 people that authorities allege used threats to try to intimidate a local labor board to revoke an existing union at a factory and install a new one.

In a video she posted after her release, Prieto called the ban unconstitutional, and said she had asked for police protection because she feared for her life.

“I cannot go back to Tamaulipas. They are violating my constitutional right to freedom of movement,” said Prieto, who vowed to fight the order, which imposed the conditions for dropping the charges. 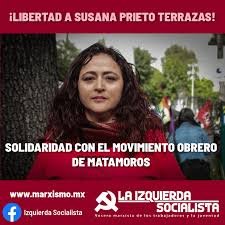