A Pentecostal megachurch preacher in Louisiana who was charged with repeatedly violating the state’s pandemic mask mandate was not permitted entry to his own court hearing on Tuesday after he again refused to wear any kind of face covering.

Pastor Tony Spell of the Life Tabernacle Church was forced to wait outside the courthouse while his attorney entered a not guilty plea on his behalf to six counts. The charges were for violating Gov. John Bel Edwards’s (D) stay-at-home order in late March and early April by hosting large indoor services at his Baton Rouge church. Spell was surrounded by a few dozen supporters as he waited for his hearing to conclude, as seen in a video posted by WBRZ’s Nadeen Abusada. 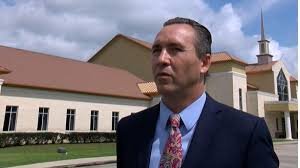