Man Sues Hertz Over Lost Receipt That Was His Murder Alibi 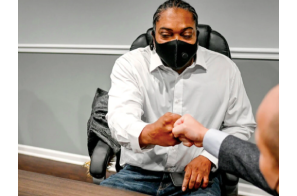 From the NY Times…

He spent five years in jail and prison before the car rental company finally located a receipt showing he was nowhere near the scene of the 2011 killing in Michigan.

A Michigan man has sued Hertz, the car rental company, saying it failed to produce a receipt that would have proved his innocence before he was convicted of a 2011 murder.

The man, Herbert Alford, was convicted in 2016 of second-degree murder in the fatal shooting of Michael Adams, 23, in Lansing, Mich. Mr. Alford insisted that he was innocent and that a car rental receipt from the Hertz location at the Lansing airport would prove that he was nowhere near the scene of the murder when it occurred in October 2011.

The company produced the receipt in 2018, and the charges against Mr. Alford were dropped last year.

Mr. Alford, 47, filed the lawsuit against Hertz on Tuesday in circuit court in Ingham County, Mich. It says that Hertz’s “actions, inactions and negligence” had helped keep Mr. Alford in jail and then prison for a total of five years. The lawsuit is seeking unspecified monetary damages.

Read the full article at