LexBlog Article: A Case Can Be Made To Replace Law Reviews With Law Blogs

We’re not so sure about that.

A good old fashioned print law review also teaches editorial, publishing and printing skills we’d be wary that those skills are retained in the forthcoming years.

Run them in parallel but entirely disposing of print versions that’s a different matter.

No one could have imagined the changes we have seen the last ten or twenty years.

Two day delivery of anything we want from the largest company in the world, a company that didn’t exist twenty plus years ago. A newly minted electric car company with a valuation in excess of all the other U.S. auto manufacturers, combined.

All the result of innovation, technology and the Internet.

But it’s possible the legal scholarship set forth in law reviews could be made more relevant – and more valuable to all involved if it were published in blogs.

“I haven’t opened up a law review in years,” said Chief Judge Dennis G. Jacobs of the federal appeals court in New York. “No one speaks of them. No one relies on them.””

The decline in the relevance of law reviews before and after the advent of the Internet is shocking. Per Liptak,

“In the 1970s, federal courts cited articles from The Harvard Law Review 4,410 times, according to a new report by the staff of The Cardozo Law Review. In the 1990s, the number of citations dropped by more than half, to 1,956. So far in this decade: 937.

Patterns at other leading law reviews are similar. And the drop in the number of citations understates the phenomenon, as the courts’ caseload has exploded in the meantime.”

Six years later, Liptak wrote of lawyers, judges and the public turning to law blogs, as opposed to law reviews.

“The judge, lawyer or ordinary reader looking for accessible and timely accounts or critiques of legal developments is much better off turning to the many excellent law blogs.”

Because of the ease in which legal blogs are found on Google and the legal niches covered in law blogs, and not covered in law reviews, law reviews are becoming increasingly irrelevant as far as the practice and administration of the law is concerned.

Imagine using the open publishing platform of record – the one used by newspapers, professionals and businesses – for legal scholarship. A blog.

Arm professors looking to discuss legal scholarship with their own printing press. A blog.

Blend legal scholarship from academics and practicing lawyers, via blogs.

Like open source technology, which has advanced technology in ways much faster than proprietary software, open law, via blogs, will advance legal scholarship, the administration of justice and public access to the law.

Seems only logical that law blogs replace law reviews. Innovation and technology is unavoidable, even in the law. 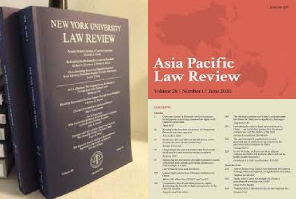