The extradition hearing for Julian Assange has been halted today amid fears that one of the prosecutors may have been exposed to coronavirus.

District Judge Vanessa Baraitser said this morning she would stop the proceedings at the Old Bailey until Monday when the lawyer’s test results are expected to be known.

“One of the barristers in the case might have had exposure to the virus”, she said.

“That is the reason the prosecution team don’t attend and some of the defence team, out of caution, and are attending remotely.

“I am told it is anticipated the testing process for those concerned will take place today. The outcome of the test will be known at some time tomorrow.”

She agreed to stop the proceedings and not sit tomorrow, but added that the case could still proceed on Monday using videolinks – even if the lawyer’s test comes back positive

The lead prosecutor in the case, James Lewis QC, and a barrister in his team, Joel Smith, appeared in court via videolink this morning while Assange’s two leading barristers were in the courtroom.

The affected lawyer, who was not present, was identified in court but Judge Baraitser asked for the name not to be made public by the media.

Assange was in the dock for the brief hearing this morning, having been brought to court from HMP Belmarsh. His barrister Edward Fitzgerald QC warned a covid-19 positive test might bring the proceedings to a temporary halt.

“If she has contracted it, we shouldn’t really be here today, coronavirus would be here in the courtroom, it’s not possible to tell how far it’s extended”, he said.

“The court staff themselves would be at risk, you yourself may well be at risk”, he told the judge.

“And finally my client Mr Assange, whose vulnerabilities you are aware of, would be at risk being in the court, counsel would have had to consult with him repeatedly.”

He said the judge had earlier ruled that lawyers and Assange should appear at the extradition proceedings in-person rather than remotely, suggesting she should stick to that decision even if the coronavirus test for the lawyers is positive and it is contemplated they could continue via videolink.

The extradition hearing is in its second week, with a further three weeks of evidence expected to be called before the judge is called on to make a decision 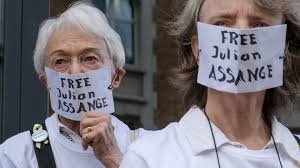