Things are not going well for Assange. If  (and we pray it happens) Biden defeats Trump. We wonder what the Biden/Harris approach to Assange will be. We fear with her prosecutorial background things will not be good for him.

The London judge presiding over Julian Assange’s extradition hearings gave the WikiLeaks founder a “clear warning” on Tuesday that additional outbursts would leave her no choice but to bar him from appearing in court.

Assange is, of course, fighting extradition. Hearings resumed Monday after a months-long pause due to COVID-19 concerns.

Assange was initially charged with conspiracy to commit computer intrusion in a seven-page indictment dated March 6, 2018. The government alleged that Assange and former Army Intelligence Analyst Chelsea Manning hacked into a military computer. Assange played a role “in one of the largest compromises of classified information in the history of the United States,” the DOJ claimed. “Assange and others at WikiLeaks recruited and agreed with hackers to commit computer intrusions to benefit WikiLeaks.”

Judge Vanessa Baraitser admonished Assange for shouting in court. Assange apparently took exception to a claim Lewis made, per Reuters: 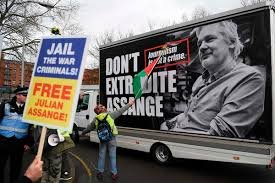