A report published by the International Bar Association (IBA) sets out the critical legal aspects of climate change adaptation and how, specifically, policy can play a crucial role in strengthening resilience and shaping the effectiveness of reducing people’s vulnerability to the harmful effects of climate change. Emphasis is placed on the importance of pursuing integrated, multidisciplinary, multilevel approaches and good governance, as well as how climate adaptation can complement climate mitigation in achieving the goals of the Paris Agreement – the international treaty on climate change.

Titled Legal Aspects of Climate Change Adaptation, the 200-page report was drafted by the IBA Working Group on Climate Change Adaptation (the ‘Working Group’), a specially convened group of legal scholars and practitioners who trained research on three core areas considered to be the most pressing for successful adaptation: migration, food security and technology transfer. Illustrating these different aspects are case studies on food security and fisheries in the Indian Ocean, desalination and the use of labour mobility to boost climate resilience.

David W Rivkin, former IBA President (2015-16) and Partner at Debevoise & Plimpton, who formed the Working Group, commented: ‘We hope that this report will contribute to the groundswell of work aimed at ensuring the Paris Agreement climate targets are achieved. Climate adaptation is an important companion to climate mitigation in bringing some stability to the climate crisis. But, for climate change adaptation mechanisms to be successful, it is necessary to comprehend fully the nature and impact of interlinking concerns, including, for example, the lack of food security being a major driver of migration as drought or floods brought about by climate change pressure rural inhabitants to move to urban areas.’

Katrina Kuh, Haub Distinguished Professor of Environmental Law, Elisabeth Haub School of Law at Pace University, said: ‘So many factors will determine how successfully a nation will be able to implement any of the recommendations included in the report. So many factors could impede change, including war or endemic poverty. And, with climate change itself being a destabilising force, it could hamper the implementation of adaptation policy as attention is diverted towards dealing with its immediate effects. Therefore, cooperation is essential at all levels local, national and international so that, for example, if policy makers were to link existing labour policies, migration agreements and climate adaptation strategies through better coordination and collective efforts, climate-related migrants could be prevented from entering the informal economy or exploitative forms of employment abroad. A more holistic approach towards harnessing the full potential of the tools and laws already in existence and the creation of new policy where required is what is being recommended in the report.’ 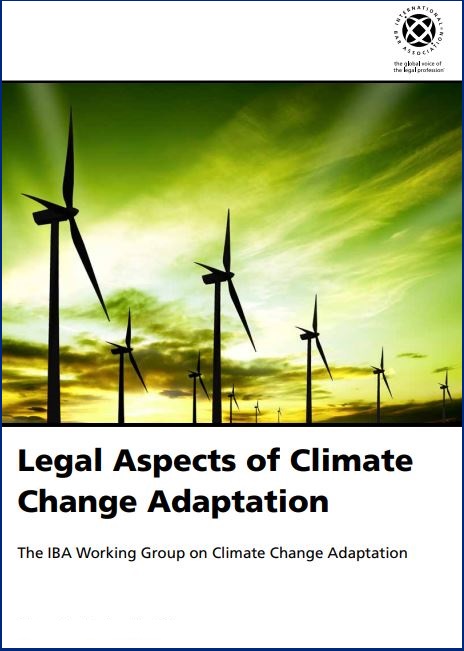 The Legal Aspects of Climate Change Adaptation report is divided into three chapters:

The report contains a comprehensive set of recommendations to assist states party to the 2015 Paris Agreement meet global warming reduction targets through climate change adaptation. The recommendations broadly fall into the areas, as per the chapters, of climate change-related migration and displacement, food security and technology transfer. Some recommendations are aimed at international organisations because of their enormous potential to influence and/or effect change.

Under the various headings, the recommendations include:

International institutions, national legislators, regulators and other standard-setting bodies should:

To better identify and quantify climate financing, the Working Group recommends that stakeholders:

Regarding the international investment law (IIL) regime, the Working Group:

The Legal Aspects of Climate Change Adaptation report is a call to governments and international organisations to take a step back, look at the bigger picture, and implement those changes that will make a difference. It follows the 2014 IBA  seminal report ‘Achieving Justice and Human Rights in an Era of Climate Disruption’, the 2020 IBA Climate Crisis Statement and the 2020 IBA Model Statute for Proceedings Challenging Government Failure to Act on Climate Change, which highlighted routes to justice for ordinary citizens affected by climate change.