Working as an attorney in public and private practice over the years, Ayer served under both Republican and Democratic presidents in various highly-placed positions at the Department of Justice (DOJ) starting in 1977. He is currently a partner at elite law firm Jones Day.

“I believe that William Barr poses the greatest threat, in my lifetime, to our rule of law and to public trust in it,” Ayer said during his summary opening statement before the House Judiciary Committee. “That is because he does not believe in its core principle: that no person is above the law.”

Ayer previously called Barr “un-American,” writing that the attorney general should resign or be impeached. 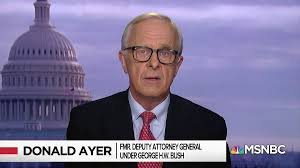