Egypt: lawyers strike to protest the imprisonment of six colleagues

The Egyptian Bar Association announced Thursday an “indefinite” strike to protest the imprisonment of six colleagues for a brawl with clerks earlier this month.

“We immediately suspend all our activities, we will stop appearing in court and participating in the investigations of the prosecution from January 19 and for an unlimited period,” the lawyers announced on their union’s website.

On Wednesday, the criminal court of Marsa Matrouh (north-west) sentenced six lawyers to two years in prison following a brawl between them and three court clerks in the coastal city on January 5, according to the state-owned daily al-Ahram.

The Egyptian lawyers believe that there was “a clear intention to keep their colleagues in custody without real justification” and denounce a “rush to bring them to trial without taking the time to conduct a real investigation”, according to the statement of their union.

The lawyers of the six convicts have appealed the decision and the court is expected to consider their request on Sunday.

In December, thousands of Egyptian lawyers demonstrated outside their union’s headquarters in central Cairo – an unusual occurrence in a country where public demonstrations are banned – to protest a new electronic billing system introduced by the Ministry of Finance. 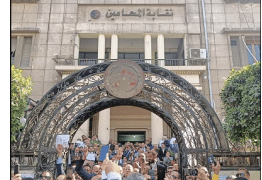