China and Authoritarian International Law
Wednesday, October 7, 2020
9:00 AM U.S. Eastern Time
RSVP for this event
*We will send the Zoom information the day before the event.
Please check your junk email folder if you do not receive it by 4 PM the day before the event.
About this Event
International law has mainly been a product of liberal democracies since World War II.  But democracy and liberalism are under assault from populists, economic nationalists, and autocrats. Tom Ginsburg, a professor of law and political science, asks what international law might look like if the global trend toward authoritarianism continues. He argues that today’s authoritarian regimes, including China, are using international law to promote their own survival, and may end up reshaping it in important ways. To learn more, visit: usali.org

About the Speaker
Tom Ginsburg is the Leo Spitz professor of international law, Ludwig and Hilde Wolf research scholar, professor of political science at the University of Chicago Law School. His research focuses on comparative and international law from an interdisciplinary perspective. He holds BA, JD, and PhD degrees from the University of California at Berkeley. His latest book, How to Save a Constitutional Democracy, was written with Aziz Z. Huq, and his earlier books include Judicial Review in New Democracies (2003), which won the C. Herman Pritchett Award from the American Political Science Association; The Endurance of National Constitutions (2009), which also won a best book prize from APSA; and Judicial Reputation (2015). He currently co-directs the Comparative Constitutions Project, an effort funded by the National Science Foundation to gather and analyze the constitutions of all independent nation-states since 1789. Learn more here. 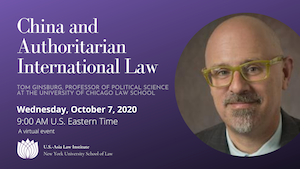