Burgers At Dawn: Two San Antonio restaurants in legal fight over use of ‘juicy’

The letter, which Weissman posted to his Instagram yesterday, was sent on Longhorn Cafe’s behalf by lawyer John Cave of Gunn, Lee and Cave PC. It demands that Weissman stop using the name “Mr. Juicy” at the McCullough and Hildebrand locations, or any other restaurants.

The letter also demands that Weissman remove Mr. Juicy from all internet listing sites such as Yelp and food delivery sites such UberEats. It gave Weissman 10 days to respond.

The letter, which was partially cut off in Wessman’s post, doesn’t state why Longhorn Cafe is asking Mr. Juicy to stop using the name.

Weissman said he has never had a customer or incident where Mr. Juicy was confused with Longhorn Cafe’s Original Big Juicy.

Cage said Longhorn Cafe received inquiries from customers and others in the restaurant industry as to whether they opened a McCullough location, which is the Mr. Juicy location. Cage said Longhorn Cafe has branded items under “Big Juicy” for years, and “in a geographical area where you use a mark for a long time, it gives you rights to that name.”

Weissman said it is unfortunate that Longhorn Cafe didn’t reach out to him to work something out before sending the letter. Nevertheless, he intends to fight it, which he acknowledges will cost money. 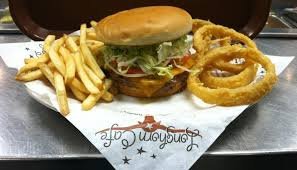