Law360 (January 9, 2019, 6:28 PM EST) — The company behind the Bubba Burger won approval Tuesday from the U.S. Patent and Trademark Office to register the unusual shape of its frozen patties as a trademark.

www.flickr.com
“The distinctive shape of the burger is integral to the marketing of the product,” the company’s president wrote in a declaration filed to the USPTO. “As a result of our continual focus on the unique shape of the ‘Bubba Burger’ product, it has become ubiquitous to those who purchase and cook frozen hamburgers.”

Bubba Foods is a United States producer of frozen burgers founded in 2000.[1] Their primary product, Bubba Burger is produced using whole muscle USDA Choice chucks and has grown considerably in popularity in the recent years.[2]

BUBBA burger was created by Walter “Bubba” Eaves during the 1990s. The burger is designed to be cooked from a frozen state and does not require defrosting. Eaves avoided fillers and trimmings and used primarily meat chucks. Distribution of Bubba burger began with grocery stores in the Southeast and expanded across the nation. The burgers are now commonly found in many retail stores across the US.[3]

They have since expanded their product line to include: 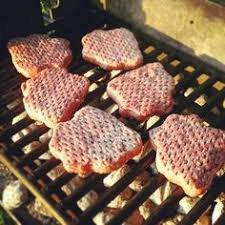