Bootleg Podcasts Are a New Frontier for Unlicensed Music on Spotify

This Pitchfork article is interesting

Things got weirder as you scrolled. In the second row, there was “Juhn – In My Feelings (Spanish Version),” a “podcast” with only a single three-minute “episode,” which was actually just a cover of Drake’s “In My Feelings” by the Latin trap and reggaeton artist Juhn. The musician uploaded “In My Feelings (Spanish Version)” to YouTube in July 2018, just days after Drake’s original came out, but for whatever reason—issues around rights and royalties seem a strong likelihood—it is not available as a proper “song” on Juhn’s Spotify artist page. A year and a half later, someone evidently felt the desire to make up for this absence, so they uploaded “In My Feelings (Spanish Version)” to Spotify themselves under the guise of a podcast. Within a few weeks of its January 10 upload, it became popular enough to compete for space with “Dolly Parton’s America” and “All Songs Considered.”

“In My Feelings (Spanish Version)” is far from the only case of piracy hiding in plain sight here. Scrolling further down Spotify’s top music podcasts last week, you’d find “Bantal Empuk,” a self-described “collection of songs that aren’t available on Spotify,” featuring various non-album tracks by rappers Juice WRLD, XXXTentacion, and Lil Pump. Like all of the podcasts in question, it functions essentially like a playlist, with each song represented as a single “episode,” and none of the, you know, talking commonly associated with the podcast format.

Spotify and other major platforms like Apple don’t publicly disclose their processes for ranking podcasts, but industry experts believe the calculation involves a combination of factors like play count, number of subscribers, and listener ratings. The regular appearance of apparently pirated material on the music podcasts ranking raises the possibility that a song like “In My Feelings (Spanish Version)” is a minor hit that isn’t being formally accounted for.

Also recommended by Spotify last week was “rootbeer float,” which collected, among other things, a Hobo Johnson song ripped from a Tiny Desk Concert, a Childish Gambino freestyle, a lo-fi hip-hop remix of the theme song to the Disney Channel’s Gravity Falls, and “that song from that one tiktok lol.” (Readers of a certain age may recognize that last one as Bobby McFerrin’s “Don’t Worry Be Happy,” or “that song from that one singing fish lol.”) Ranking just below that, the “FunkyMan” podcast advertised “some going viral remixes and songs which aren’t on Spotify”; “musicas q não estão no spotify,” recommended further down, included bonus tracks and demos from artists like Alec Benjamin and MARINA, as well as “Sweet Caroline with guns,” an absurdist remix of the Neil Diamond standard, which (like “Don’t Worry Be Happy”) is evidently popular on TikTok.

Like so much about contemporary culture that seems inexplicable to those over 30, the proliferation of all this unlicensed flotsam among professionally produced and distributed podcasts like “Song Exploder” may be partially attributable to every teenager’s favorite Chinese video-streaming app. While attempting to deduce the source of the sudden belated popularity for Juhn’s Drake cover, I found a YouTube compilation of teen girls dancing and lip syncing along to the “In My Feelings (Spanish Version) Challenge” on TikTok.

But other songs, like the aforementioned Alec Benjamin and MARINA demos, bear no obvious relationship to TikTok, and likely serve young and extremely online fanbases that don’t feel like tabbing over to YouTube to hear unofficial tracks by their favorite artists. Some popular entries hint at stranger depths: Podcasts appear in the ranking periodically with titles presenting some variation on “slow + reverb,” offering syrupy and spectral bootleg reworks of songs by the 1975, Ariana Grande, Cuco, and more, like DJ Screw tapes for Gen Z pop fanatics. (One “slow + reverb” podcast appeared for a time this month in Spotify’s Top 40 overall podcasts chart, beating out every single music podcast but Budden’s.) These “slow + reverb” remixes are almost unbearably poignant, with a few simple tweaks that can transport even upbeat originals to a nether realm of romantic ennui and isolation.

Last year, Pitchfork reported on the ways in which leaks, demos, and other unlicensed tracks appear on established artists’ official pages without their permission, enriching the leakers without directing any royalties to the artists themselves. Podcasts, which were first integrated into Spotify in 2015, may present a new frontier for the dissemination of pirated songs. As a distribution method, podcast piracy is ingenious, sidestepping the more stringent protections likely to be in place for audio uploaded to Spotify’s official artist channels. The strategy also takes advantage of the broad nature of the streaming service’s search function, which trawls albums and podcasts simultaneously for relevant results. Search for “In My Feelings” and the Juhn “podcast episode” appears right alongside the Drake song; without looking carefully, you might not even notice the categorical distinction between the two.

As a get-rich-quick scheme, though, this phony podcast approach is distinctly lacking. Unlike the profiteering leakers who seek to infiltrate official artist channels, podcast pirates don’t stand to gain financially, because Spotify and other streaming services don’t pay out royalties for podcast plays. (Podcasts that do turn a profit tend to do so through advertising deals, donations, and listener subscriptions to exclusive content, which are worked out separately.) The lack of a profit motive reinforces the suggestion that this is a listener-driven phenomenon, with no clear purpose beyond making the music you love available on your platform of choice.

According to a Spotify spokesperson, the streaming service is aware that podcast piracy is happening, and attempting to correct it. “We take this mislabeled content extremely seriously,” the spokesperson told Pitchfork in a statement. “Spotify has multiple detection measures in place monitoring consumption on the service to detect, investigate and deal with such activity.”

Over the last several weeks, nearly all of the music podcasts mentioned in this piece—and others, including multiple “slow + reverb” collections, and compilations of Lil Peep YouTube loosies and Harry Styles live recordings—have disappeared from Spotify after making appearances on the ranking, the apparent result of the platform’s detection measures. But there are always more podcasts to replace them: This week, a collection of Lana Del Rey demos and live bootlegs crept into the overall podcasts chart, just behind “WTF with Marc Maron.” 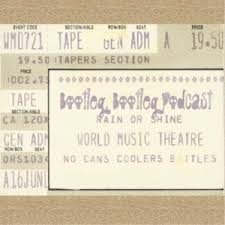