Australian manuka honey producers have scored a win over their trans-Tasman rivals after New Zealand producers backed out of legal action aimed at preventing them from using the descriptive word.

A group of New Zealand manuka honey producers have been attempting to block their Australian counterparts from using the word “manuka” in export markets around the world since 2016.

Manuka honey from both countries is sold for hundreds of dollars a kilogram, and is included in a range of medicinal products because of its anti-viral, anti-bacterial, and anti-inflammatory properties.

The New Zealand Manuka Honey Appellation Society recently backed out of an appeal before the United Kingdom’s High Court, as well as similar legal action in the European Union, meaning Australian producers were free to call their product “manuka honey” in those valuable markets.

The UK Intellectual Property Office had previously ruled in favour of Australia.

Both parties are still waiting to hear the outcome of a hearing held in 2021 before the Intellectual Property Office of New Zealand.

The NZ Manuka Honey Appellation Society argues manuka is a M?ori word, and has attempted to trademark it in their home country, as well as the USA, UK, EU, and China.

It was seeking exclusive use of the word via a trademark, a move that’s been rejected in the USA previously.

The plant that produces the pollen used by bees to make manuka honey, Leptospermum scoparium, grows natively on both sides of the Tasman.

The Australian Manuka Honey Association, which has appointed two M?ori board members, has demonstrated the word has been used in Australia to describe the plant and the honey produced from its pollen since the 1930s.

It has also abstained from using a macron over the “a” in its branding.

Association president Paul Callander said the legal victory would have significant benefits in the sizeable UK and EU markets.

“This victory provides our industry with a noble precedent against some in New Zealand who are attempting to monopolise the term manuka honey for their own commercial gain,” Mr Callandar said in a statement.

“Australian growers have every right to use the word to describe their produce as upheld by the UK Courts.” 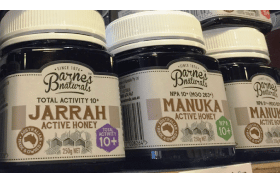