Article: Why Are There So Few Black Music Supervisors?

Yes something we’ve asked ourselves for years……..

Music supervision has typically been considered to be a more niche career path, as far as music industry jobs go. The rise of streaming platforms as a leading tool for Film and TV distribution, and the influence of wider popular culture on advertising and video games however, shows that times are changing. The need for highly curated content wherein music is integral to the narrative has never been stronger. No longer considered a career that most would stumble upon, now there are many young people who aspire to become music supervisors, and who could blame them? Getting to help provide the soundtrack for the content that you consume everyday seems like a dream job. For many young Black people, seeing how influential Black culture and music is on these projects, it would be easy to assume that the field is filled with Black tastemakers, however, you’d be mistaken.

Take recent projects such as Insecure, The Last Dance or even, Nike’s ‘Nothing Beats A Londoner’ campaign. All very clearly narratives that couldn’t exist without Black culture or music, but none of their music supervisors are Black themselves. Now, of course, you can’t deny that music is universal and that all can be appreciative and highly knowledgeable of all genres, regardless of their ethnicity, but it’s also worth considering how often there are calls for diversity amongst a project’s cast, production staff or writing room. This isn’t typically the case for the music department. The right person for the job, doesn’t necessarily have to be white. People who use the argument that jobs should just be for the ‘best person’ carry the assumption that this person won’t be Black. Authenticity is important, particularly when a narrative is centering an underrepresented demographic, and this is something that I have recognised being a rarity myself – a Black female music supervisor. For this reason, I decided to tackle the elephant in the room by chatting to some of my fellow Black members of the London sync community: why are there so few Black music supervisors?

“The system isn’t necessarily designed with Black people in mind,” says Rio Attoh-Wood, Creative Producer at Rhythm & Sync. “It’s not really a surface level issue, it’s reflective of the music industry as a whole, which is unfortunately systematically racist.” Whilst this issue is undoubtedly reflective of the world at large, there is also the matter of the way in which music supervision has been historically framed as a career choice. As a woman of Nigerian descent, the idea of working in the music industry is quite simply a ludicrous idea culturally. From birth, you’re destined to become a doctor, lawyer, teacher or work in the civil service, as these are guaranteed jobs for life. Chi Chi Nwakodo, Creative Sync Executive at Sony/ATV, also of Nigerian descent, agrees here. “There’s the idea of financial access and viability amongst many people from 1st generation African families,” she begins. “And this is typically reflected across the diaspora. Black people are less likely to look beyond traditional career paths unless they’re already excelling within the creative field.”

For Toby Williams, a music supervisor at Leland Music, racial identity and representation is key for attracting more Black people. “As a light-skinned mixed race person, I didn’t really see my Jamaican heritage reflected in the industry, so it’s not something I really considered and leaned into until I got to a more senior position.” Whilst some could argue that representation isn’t necessarily the solution, the benefits of it aren’t entirely lost by young Black people. “Seeing yourself in positions of authority is really important,” he continues. “Our industry can definitely be accused of not having that. There’s a feeling of belonging that you can plug into. If you already see yourself in senior positions, then that appears to be a viable goal and allows for a smoother progression within the industry.” Chi Chi also points to this lack of visibility being at odds with the current musical landscape, especially as an exec at a major publisher. “So much of the music that we sync is Black,” she starts. “So even when the artists come to the office for meetings, it must be odd for them to see the team working behind it not being reflective of that.”

The importance of having visible people in senior positions also leads to a general lack of awareness for young Black people. As someone who attended a myriad of ‘Intro to the Music Industry’ events as a teenager, sync was never mentioned, but there was always a host of A&R and Marketing managers from major labels in attendance. “Sync has historically been in the background of the label infrastructure,” suggests Dane Bradshaw, Head of Sync at Ministry of Sound Publishing. “Publishing is only really considered once an artist gets to a certain point, so it’s pretty low down in the hierarchy of music jobs.” Rio agrees here, highlighting that the glamour of roles such as A&R sometimes means that they take precedence over roles in other departments such as sync and licensing. “When I started out, I wanted to make music but I found it so hard and there was lots of waiting around,” he says. “It wasn’t until I learned about the business side of things and found the value of sync and licensing, that I saw how many other roles there were in the industry.”

So with all of this said, what exactly can the sync community do to encourage more Black people to get involved with sync and music supervision. “So much of the really exciting stuff going on is at grassroots level,” Dane believes. “I recently did a talk at a youth centre called Spotlight, who have a full service for sports, music and different kinds of education. We need to look beyond the traditional areas of music education.” Both Chi Chi and Toby agree, citing that often recruitment processes rely too heavily on the same sources. “We need to be advertising in the relevant groups,” Chi Chi starts. “The sync community is really tight knit but jobs rarely go beyond that.” For Toby, the cozy nature of the sync community, whilst welcoming, is ultimately detrimental to innovation. “Output is really important, so I can’t imagine why as creators we’re not actively recognising the breadth of perspectives that are out there,” he states. “It seems like a must, especially considering how dynamic the projects we’re working on are. There needs to be more imagination and resources to go beyond the ‘easy picks’. The rewards for doing so are huge and if we don’t we’ll just get left behind.” Something that all of us were in agreement with was the age old elephant in the room – privilege. “The sync community is a bubble and I think it’s only now, that people are starting to pick up on their privilege,” Rio argues. “There haven’t really been any major incentives to help young Black people, it hasn’t really been a concern or issue that people want to address as it’s something that likely doesn’t directly affect the daily lives of most of the people in the sync community.”

Whilst all of this might seem daunting, it’s clear that for many in our little bubble, innovation is key. For any aspiring young, Black music supervisors, don’t lose hope, there’s definitely a space for you. “Holla at me!,” Dane says. “Track down people’s details and research companies and people who are doing things that you admire. Especially now because of COVID, people are much more responsive.” All were also in agreement about reaching out, but Toby did point to the awareness that this might be daunting to some. “It wasn’t until I found my feet that I realised how willing people were to play the role of a mentor, I always feared that I was wasting people’s time, but now when I see a young person who is willing to knock down doors and has the foresight to chat to the appropriate people, I find it really impressive.” Chi Chi and Rio also point out that for young people looking to get ahead in the sync world, there’s a little bit of work that they can do themselves to stand out. “If it’s financially viable, see if you can help out on projects that your peers may be doing to create a portfolio,” Chi Chi suggests. “Things are hypervisible now, so promote yourself on social media and put the version of yourself out there that you want people to see and employ you for.” For Rio, being realistic about all of the parts involved is also incredibly important and is a good way to get ahead. “Make sure you know how the business works,” he suggests. “Whilst it may not be glamorous, it’s one of those things, as someone who makes music, that allowed me to not get exploited.” Education ultimately, is what can set you apart, as Toby points out. “Surround yourself with the thing you love,” he starts. “It can be a real career. Educate yourself about it, study a director and their relationship with a composer and understand that it’s directly linked to this industry. Reach out to those people. Don’t feel like you’re bothering people. Demonstrate your interest and be entrepreneurial.” 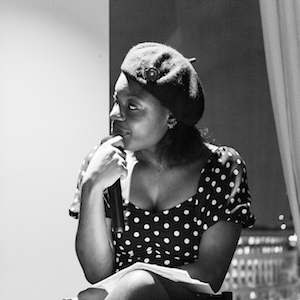