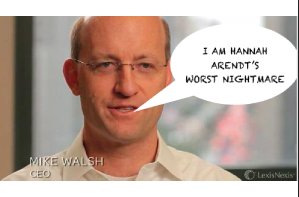 The deal is already drawing criticism. Less than two years ago, LexisNexis downplayed ties to ICE, claiming it was “not working with them to build data infrastructure to assist their efforts.”

LexisNexis’s ICE contract was shared with The Intercept by Mijente, a Latinx advocacy organization that has criticized links between ICE and tech companies it says are profiting from human rights abuses.

Surveillance capitalism is a market-driven process where the commodity for sale is your personal data, according to a definition by Donell Holloway, who wrote for The Conversation while working as a senior research fellow at Edith Cowan University. Capturing and producing this data relies on mass surveillance of the internet, an activity often undertaken by companies that provide us with free online services, such as search engine Google and social media platform Facebook.

Companies collect and scrutinize our online behaviors (likes, dislikes, searches, social networks, purchases) to produce data that can be used to make money. It’s often done without us understanding the full extent of the surveillance, Holloway wrote.

The ICE contract shows NexisLexis will give the U.S. Department of Homeland Security access to billions of records of personal data aggregated from public and private sources, including credit history, bankruptcy records, license plate images, and cellular subscriber information. The company will also provide analytical tools that can help police connect the data to “the right person,” The Intercept reported.

LexisNexis creates dossiers about citizens and the undocumented alike. Things like where you’ve lived, worked, what you’ve bought, your debt, run-ins with police, family members, driving history, and more. Even people who are diligent about their privacy can be identified and tracked, The Intercept reported. The company claims it has 283 million individual dossiers tied to “LexIDs,” unique identification codes that make it easy to pull material collected about a person. It claims “LexIDs” are 99.99 percent accurate.

If LexisNexis is not fudging its numbers, that means 28,300 people could potentially end up falsely accused in prisons due to its 0.01 percent of inaccurate information.

While you can at least try to block surveillance technologies like facial recognition or phone tracking, it’s almost impossible to be in the world today without generating computerized records like the ones LexisNexis gets and packages for resale, Sam Biddle wrote for The Intercept.