Article: A look under the hood at the engine transforming state trial court legal research and analytics

Posted on September 8, 2020 by Joseph Lamport

If you want to understand how advanced technology is driving transformational change in the legal market, instead of looking at how law firms and lawyers operate today, it is far more instructive to consider the legal tech companies that are building next generation tools and products based on AI and machine learning.  These companies are themselves the first and best proponents for a new way of doing business, illustrative of the incredible things that can be accomplished with state-of-the-art technology. They are building their own businesses from the bottom up, leveraging AI and machine learning to the max.  This is what enables them to run lean and also run circles around their larger entrenched competitors, such as Thomson Reuters and Lexis-Nexis.  This is what enables them to routinely bring innovative products to market.

Trellis Research Inc. is a perfect example.  Founded as a bootstrap start-up in 2018, the company has single-handedly pioneered the idea of collecting and mining state trial court data to provide valuable insights for litigators and legal teams.   In less than 3 years, Trellis developed the technology, collected a trove of data, launched a first-generation product in California, and then rolled out their service in rapid succession in New York, Texas, Florida, Delaware and Illinois.  Not too shabby for a start-up that only recently increased their headcount from 6 to 15.

Of course, as with many start-ups, Trellis also has a more complicated and interesting back story.  The idea for the business initially sprang from the brain of Nicole Clark, while she was a litigator at a California law firm, with a practice focused on employment law.  From an early stage in her career, Nicole had been struck by the haphazard way in which lawyers prepared motion papers, without ready access to reliable information about the trial court judge who was scheduled to handle the hearing.

Clark’s aha moment came one night while she was writing a motion for summary judgment.  Lacking any information about the judge, she felt hamstrung about how to structure her argument.  After complaining to a colleague working down the hall, it turned out that the colleague had appeared before the same judge and had a copy of the judge’s prior ruling on the exact same question at issue in the pending motion.  “And that was when the light bulb went off for me,” according to Clark.  “I realized how crazy it was that lawyers didn’t have ready access to that kind of practical information even though the data was out there. How was it possible that here we were primarily litigating in state trial courts, and yet we were using appellate court resources to do all of our legal research? It just didn’t make any sense.”

Read the full article at    https://ai.pinhawk.com/article/trellis-legal-intelligence-a-look-under-the-hood-at-the-engine-transforming-state-trial-court-legal-research-and-analytics.html 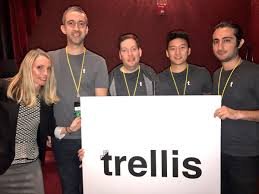