And This Week, America’s Most Repulsive Lawyer is… James E. Kolenich

The ABA Journal reports…… A Cincinnati-area lawyer stepped forward when white supremacists and neo-Nazis had trouble finding legal representation in a civil case stemming from the violent protests in Charlottesville, Virginia. ….“My willingness to get involved is to oppose Jewish influence in society,” Kolenich told the Cincinnati Enquirer.

The lawyer, James E. Kolenich, got involved because “white people must save and preserve their civilization,” the Cincinnati Enquirer reports.

“My willingness to get involved is to oppose Jewish influence in society,” Kolenich told the Cincinnati Enquirer. “It’s plain that white people are the chosen people in the New Testament. It’s the job that we were given, to spread Christianity around the world. That doesn’t involve hatred of other races, not even of ethnic Jews. But it does involve opposing their un-Christian influence in society.”

Kolenich also questioned the accuracy of the estimated number of Jewish people killed by the Nazis, and even questioned whether the Holocaust actually happened, according to the Cincinnati Enquirer.

Jackie Congedo, director of the Jewish Community Relations Council, the public affairs arm of the Jewish Federation of Cincinnati, told the Cincinnati Enquirer that Kolenich’s statements are offensive. “Any effort to limit the rights of any minority to live freely in this country is discriminatory, and any effort to limit the freedoms of Jews is flat-out anti-Semitic,” Congedo told the newspaper.

Kolenich is one of two lawyers representing rally organizers in a civil suit claiming they conspired to deprive the plaintiffs of their civil rights by encouraging violence in Charlottesville, the New York Times reported earlier this month. The name plaintiff in Sines v. Kessler is Elizabeth Sines, a 2L at the University of Virginia law school who says she suffered severe emotional distress after seeing the violence during her own peaceful protests.

The other lawyer for the white supremacists is Virginia lawyer Elmer Woodard, who came to the case through his representation of one of the defendants on a criminal assault charge. At an early court appearance for his client, the Times reports, Woodard “wore a bow tie, a Victorian-era waistcoat and a Jazz Age boater hat.”

If  you must read more it’s at 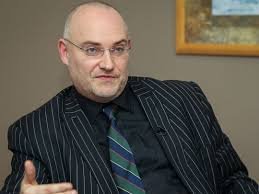