AG Barr Is A Reckless Superspreader Say US Media Reports

Law & Crime report…..Attorney General Bill Barr is facing a mounting avalanche of criticism and concern over his decision to forego quarantine procedures after he was recently in close contact with several people who have since tested positive for the novel coronavirus (COVID-19).

On Sept. 26, Barr attended the by-now infamous superspreader event in the White House Rose Garden where Seventh Circuit Judge Amy Coney Barrett was formally nominated for a position on the U.S. Supreme Court following the death of Ruth Bader Ginsburg.

At least eight people who attended that ceremony have since tested positive for COVID-19–including the president, his wife, and three high-profile GOP senators whose votes are instrumental in Barrett’s would-be confirmation. An additional 90-plus individuals attended that event and many of those people have tested negative–while the verdict is still out on many more. Barr’s refusal to isolate himself under such circumstances was already viewed as cause for alarm, but his specific proximity to one person in particular has prompted a wellspring of critical musing.

Presidential counselor Kellyanne Conway confirmed that she tested positive for COVID-19 on Friday evening–and several videos and photos show Barr mere inches away from Conway’s at the so-called and gallows-humor-denominated “Rose Garden Massacre.” 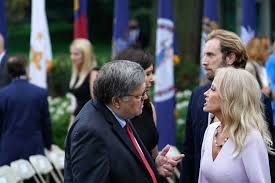