Above The Law Interview Adam Balinski Founder Of “Crushendo”

Those unusual hypotheticals describe two real moments in the almost unbelievable story of 33-year-old Adam Balinski, the millennial who launched Crushendo, only a year after taking the bar exam himself. Reports ATL

Prior to law school, Balinski worked as a TV reporter for a CBS affiliate and then as a corporate trainer and instructional designer for Epic, a behemoth medical software company. Both careers proved critical in his preparation to found a revolutionary education company that specializes in audio outlines, audio flashcards, storytelling, and mnemonics.

It’s not an exaggeration to say no one has done law school quite like Balinski. While serving as a Law Review senior editor, he simultaneously served as editor-in-chief of the Education and Law Journal at BYU Law. During law school, he welcomed his third child. He served as a religious leader of a local congregation of The Church of Jesus Christ of Latter-day Saints. Beginning with his 1L summer job, Balinski worked straight through graduation and the bar exam to support his young and growing family. He interned with a few law firms, was a legal writing teaching assistant, worked in-house at Melaleuca and Pluralsight, and even taught Swedish at the university — yes, he had all of those jobs at some point during law school. Vad fantastiskt!

Now, you’re probably wondering, how the heck did he manage all of that without become an absentee husband and father? Along with saying a mountain of prayers, he credits an innovative study group and custom-crafted audio outlines.

Balinski has blogged at length about how he creatively and efficiently leveraged his study group. So, this article will focus on how he used audio.

I recently had the pleasure of speaking with Adam Balinski. In true Adam-fashion, he was doing two things at once. While I interviewed him, he was on his way to pick up an order of new Crushendo shirts. Here’s a (lightly edited and condensed) write-up of our lively conversation about bar review and how he built a successful company from the ground up.

Read the interview at  https://abovethelaw.com/2020/07/meet-the-millennial-turning-bar-prep-upside-down/ 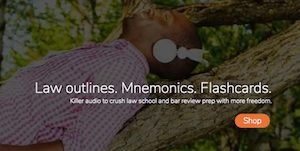