Above The Law Article: We’re Still Mad, Actually: An Open Letter To The Legal Profession From A COVID-19 Bar Examinee

As someone whose law license hung in the balance during a global pandemic, who joined thousands of her peers in calling for necessary licensing alternatives, and who got the equivalent of a middle finger from folks who claimed they looked forward to having us as “colleagues” — I’ve got some words. And after all the conversations I’ve had during and after this debacle, I know there are many others who share these feelings, even if they won’t say so out loud.

Our diploma privilege advocacy was never about trying to just “skip the bar exam.” If our goal was to skip out on hard things, we wouldn’t have gone to law school. We wouldn’t have taken on hundreds of thousands of dollars of student debt, and spent three sleep-deprived years preparing to join this profession. It’s insulting to assume as much — to treat us like errant children who would capitalize on a health crisis to sidestep a requirement we’d known about and accepted for years. We raised and advocated for emergency diploma privilege because it’s a known path to licensure and was the rational solution under the circumstances. Between a rote memorization test of questionable value and ensuring people had a safe, ethical entrance to the practice of law, we figured reason would be pretty easy to see. Instead, we watched most states flail clumsily to avoid it, while a lot of practicing attorneys just … looked the other way.

Look, we get it. With the global pandemic and all, there was a lot going on. We weren’t everyone’s first priority, and we didn’t expect to be. But imagine being eyeballs deep in student loans, quarantine, and existential terror, and having the one thing standing between you and a living be a test that’s literally never been proven worthwhile, yet the profession insists on having for … reasons. And one whose administration is repeatedly bungled, very publicly, by the incompetence and delusion of the people in charge.

New York, for instance, thought problem solving looked like limiting its in-person test to in-state applicants — creating interjurisdictional chaos as out-of-state grads scrambled to test elsewhere (spoiler: that exam was later cancelled and moved online). Texas bar examiners, meanwhile, fully jumped the shark and decided to claim a hotel was “pandemic proof,” which is something I will … never forget hearing one say with a straight face on Zoom. All that time, examinees — myself included — clung to the hope that rational minds would ultimately prevail. And in a small handful of miracle states, it did. But for the rest, the situation just continued to heighten in absurdity — to the point where, to get or keep jobs they’d already earned, examinees had to attend live superspreader events (pre-vaccine, mind you), or use software that forced some to soil themselves on camera or blast light on their face so their skin color could maybe be recognized. 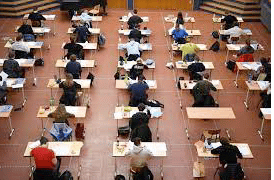