ABA – “Is the law library a thing of the past for law firms?

It’s time for the annual, death of the law library article.

Yes for small law firms law libraries are morphing into specific app solutions but anybody telling me that large white shoe law firms won’t need librarians or libraries I will just laugh at them.

Here at HOB we remember the period when firms thought they could dump librarians and replace them with partners, who thought they knew everything about legal info management, until of course they realized they were clueless and had to spend twice as much money hiring library staff back.

Here’s what the ABA  article says…

When I became a lawyer more than half a century ago, the law library was, by any measure, the heart of my law firm. It was where lawyers went to do legal research—any and all research. That meant that all the younger lawyers were in the library at some point virtually every day. On occasion, all the firm’s associates were in the library at the same time. Many partners were also regular visitors.

The library was, in many respects, a pleasant place to spend time. Visually, it was undeniably attractive. The endless shelves of uniformly bound volumes made an appealing background. (Television and movie producers must agree. To this day, you rarely see a shot of a lawyer’s office without such volumes prominently on display.) All those volumes, with all that learning, made me feel serious—even important.

The presence of other lawyers, especially the ones near my age, was another attraction. We engaged in small talk, and we discussed the legal issues that had brought us there. Looking back, I realize that in our legal analysis, we sometimes relied on those discussions more than was warranted. I was often tempted to give weight to a fellow associate’s opinion of an issue—particularly if it coincided with my own—even though that associate knew no more than I did about the subject (which might be next to nothing). Call it safety (or at least comfort) in numbers.

In 1989, after many decades in a 1913-vintage bank building, the firm moved into a new downtown office building of its own design. (I was exempt from moving duties because the move-in date coincided with my wedding, but no, that’s not why I chose that day.)

The architects commissioned by the firm specialized in space for professional service organizations, such as law and accounting firms. The design reflected a profound understanding of lawyer egos, as demonstrated by the creation of 16 corner offices on most floors.

But back to the library. The front of the top floor of the building was the firm’s main reception area, where the elevators deposited clients and other visitors. It was designed and furnished to impress, with an ocean of marble flooring and equally impressive furnishings. The entire balance of the top floor was dedicated to the law library, which also occupied the corresponding space on the floor below.

The two floors of the library were connected by an elaborate interior stairway, separate from the other stairways in the building. Any interior stairway would have consumed a significant amount of space on each floor. But this wasn’t just any stairway. This stairway wound its way leisurely and impressively from one floor to the other, consuming what felt like acres of otherwise usable floor space.

The library was beautiful, even lavish, with its grand stairway, soaring windows, endless rows of uniformly bound volumes, matching cherrywood bookcases, rolling ladders, tables, carrels and millwork. I shudder to think how many cherry trees were sacrificed for those furnishings.

In the heady days, when we first occupied the building, we all but wept at the beauty of that library. But it wasn’t just its beauty. With a monopoly on research resources, the library remained essential to our practice of law and therefore a daily gathering place for our lawyers.

We relied on that library, and we loved it—for a time. Why only for a time? Because the library became an anachronism. Its utility dropped dramatically, as lawyers shifted from their reliance on books and loose-leaf services to the internet—first using desktop computers and then also using laptops, and eventually, they relied on pocket-size smartphones, as well.

Our beloved library became a ghost town. We rarely entered it. It took on the sad aura that vacant, disused space always seems to adopt. In fact, we no longer saw it as beautiful. How could something be beautiful when looking at it made you sad?

Thirty years after moving into the building, the firm commissioned a major renovation of all its many floors. What was the fate of the library? The same as the fate of your family’s old cathode-ray tube TV in the enormous walnut cabinet: abandonment. The firm relinquished its rights to the top two floors, including the reception area and library, and expanded onto floors below its existing space. Who took over those two floors? No one. They remain vacant to this day.

What does the firm’s new library look like? There isn’t one.

I miss that library. I miss the concept of the library as a central gathering place in a law firm. Conducting research on the internet is undeniably more efficient than reliance on a roomful of books and loose-leaf volumes. But it’s also a more solitary, lonelier activity. And it doesn’t help develop and maintain a sense of community and a firm culture the way that the library did.

But why listen to me? I’m so stuck in the past that I still wear a suit and tie to the office.

Norm Tabler is a retired lawyer in Indianapolis, where his practice focused on health law. He serves on the editorial advisory boards of the ABA Health Law Section’s The Health Lawyer; the ABA Senior Lawyers Division’s Voice of Experience e-newsletter (for which he writes the column “Adventures in the Law”); and the Indiana State Bar Association’s Res Gestae (for which he writes the column “Annals of the Law”). He writes and records a monthly podcast, The Lighter Side of Health Law, for the American Health Law Association’s Health Law Weekly. 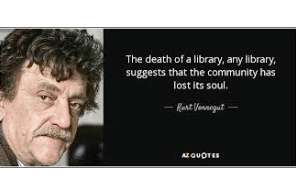