ABA Article: Can plaintiffs from other countries hold China legally accountable for the coronavirus pandemic in their respective courts?

Here’s the introduction to the ABA piece, an interesting article worth more than a cursory glance, We’d suggest.

Barely 24 hours after the World Health Organization officially designated COVID-19 as a pandemic on March 11, the international legal blame game began. The first firm to file a lawsuit against the government of China and the Chinese Communist Party was Florida-based Berman Law Group, a Boca Raton firm with a heavy emphasis on mass torts and class actions.

Matthew Moore, the firm’s litigation attorney, stayed up all night drafting the complaint, which he filed in the Southern District of Florida the day after the declaration by the WHO. The case, a class action suit, was brought on behalf of individuals and small businesses alleging a variety of financial and health damages, on grounds citing China’s negligence in failing to contain the virus and in actively concealing the outbreak and its extent from the world.

In April, Moore expanded the effort with a second complaint designating another class: health care workers. Hundreds of nurses and doctors have joined the suit claiming China harmed them by hoarding essential personal protective equipment they needed for work safety. In short order, federal lawsuits were filed in California, Texas and Nevada, and even the attorneys general of Missouri and Mississippi brought coronavirus cases against China.

Moore says his firm has been inundated with inquiries from potential plaintiffs. “Some days it’s 100, other days 2,000,” he says. Total inquiries have exceeded 15,000.

The firm is building a global coalition of international citizens and law firms to hold China accountable. Berman Law Group also has received offers to join its Florida lawsuits, or help prosecute them, from attorneys in more than 47 countries. Attorneys in Italy, Nigeria, Turkey and India also have independently filed complaints against China.

The litigation has spurred a double-edged question: Do international coronavirus cases have any chance of success, and even if they do, are the courts the proper forum to resolve issues that impact United States foreign policy?

The consensus among international law scholars and attorneys to both questions has been a resounding no. A gargantuan obstacle is the bedrock doctrine of sovereign immunity, which protects a nation from being sued in another nation. Most countries, including China, extend it as a reciprocal courtesy.

On May 26, however, according to the Chinese state-run press agency Xinhua and communist party publication Global Times, China’s National People’s Congress proposed drafting a foreign states immunity law to allow Chinese citizens to sue the U.S. government in Chinese courts.

Also from back in March 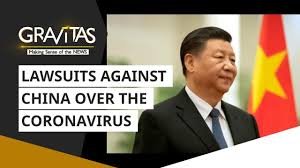