A major British-based chip developer, Imagination Technologies (customers of which include Apple), has aroused the scrutiny of lawmakers on both sides of the Atlantic as it looks to transfer ownership to China, with probes by the Committee on Foreign Investment in the United States (‘CFIUS’) and by a UK parliamentary committee appearing to have derailed those intentions.

Senior company officials, including the chief executive, are reported to have recently quit the company with press reporting one to have said in his resignation letter: ‘I will not be part of a company that is effectively controlled by the Chinese government.’

Canyon Bridge has subsequently moved its headquarters to the Cayman Islands.

‘An attempt by China Reform to stage a boardroom coup ten days ago by appointing four of its own directors [was] aborted, but the call for evidence comes amid renewed concerns that the Chinese owners of Imagination are preparing a fresh attempt to transfer sensitive technology patents to mainland China,’ reported the BBC.

Sky News reported that the moves to transfer ownership have placed Imagination Technologies ‘at the centre of government investigations on both sides of the Atlantic amid expectations of a surge in protectionist sentiment fuelled by the coronavirus pandemic.’

It reported that CFIUS began questioning the intentions of China Reform Holdings, which has close links to Beijing.

British lawmaker Tom Tugendhat said that China is trying to exploit the global pandemic to seize control of companies such as Imagination Technologies and changing the way the internet works.

‘We’re seeing quite a lot of action by the Chinese state, or state-owned companies, that seem to be exploiting this moment,’ Tugendhat, the chair of the Foreign Affairs Select Committee, told Sky. 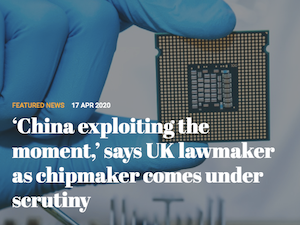