The ex-convenor of Hong Kong pro-independence group Studentlocalism was among four youngsters arrested on suspicion of inciting secession under the new national security law on Wednesday.

Chung’s detention represents the first time a political figure has been arrested under the controversial legislation which criminalises subversion, secession, terrorism and collusion with foreign powers.

Last month, Beijing enacted laws to prevent, stop and punish behaviours in Hong Kong that it deems a threat to national security. The legislation was inserted into the city’s mini-constitution, bypassing the local legislature and giving police sweeping new powers.

At an 11pm press briefing, senior superintendent of the new national security department of the police force Steve Li said that three males and one female aged 16 to 21 had been arrested – each said they were students. He said the force made the arrests based on the content of social media accounts. The posts suggested they would use all means to establish a republic of Hong Kong and unite all pro-independence political groups.

Li cited Article 21 of the security law as stating that making statements that promote secession would constitute incitement, and it is not necessary to assess if someone was actually motivated by such content.

According to Li, the force based the arrests on social media content posted after the security law was enacted, though he did not state what group or posts were involved: “Our sources and investigation show that the group recently announced on social media to set up an organisation that advocates Hong Kong independence.”

Secession is defined in Article 20 of the security as “to participate, plan or implement… acts of secession… whether or not force or the threat of force is used.” The maximum penalty is life behind bars.

Ahead of the enactment of the security law on June 30, Studentlocalism announced in a statement that it had disbanded and dismissed of all its Hong Kong members with immediate effect: “Overseas members of Studentlocalism will officially set up a branch abroad and take over all affairs of the group. We will continue advocating Hong Kong independence until Hong Kong becomes a sovereign state.”

On July 17, it announced the founding of its US division “[i]n these times when ‘Hong Kong independence’ has become a forbidden phrase that could [lead] to life imprisonment,“ they said. 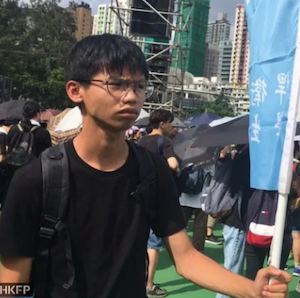